A doomed woman. A dangerous and mysterious man. And an epic passion that cannot be denied…
From the first moment I saw Malcolm, I felt his power shudder through me. Lithe and powerful, dark and controlling, he cast a spell over me that I didn’t understand, but to which I willingly surrendered.
One touch and I melted. One glance into his storm-swept eyes and I was lost. One kiss, and I was bound.
But sometimes passion can burn to hot, and it would take all of our strength for Mal and I to survive the fire that raged between us…
NOTE TO READERS: Each of the 1001 Dark Nights novellas is a stand-alone, be sure not to miss Caress of Darkness by Julie Kenner. The Find Me books are a true trilogy spanning Mal and Christina’s romance and are meant to be read in order.

FIND ME IN DARKNESS (Part 1)

FIND ME IN PLEASURE (Part 2)

FIND ME IN PASSION (Part 3)

The alley is about as wide as a car, and as I follow him past a collection of rather pungent smelling garbage cans, we pass a heavy door that I assume opens to the bar’s kitchen. A single bulb above the door emits a dim light that ostensibly illuminates the alley, but really only makes the shadows deeper.
I hear a rustling behind me and turn, expecting to find Roger. Instead, it’s the flame lady.
The first thing I notice is that her face looks normal.
The second thing is the knife in her hand.
I scream and stumble backward even as the big gray blob of a cat launches itself from the top of a trashcan and connects with her face.
The knife goes flying, but that doesn’t deter the woman, whose fingers close around my upper arm.
In that freakish trick of time, everything seems to slow and the world is suddenly more clear than it has ever been.
I feel the pressure of her fingers.
I see the cat hissing from behind a plastic crate.
I hear Brayden calling my name.
And I see a strange, colorful blade of light slice sideways from behind the woman, neatly lopping off her head to reveal the tall, dark, god of a warrior wielding a sword behind her.
What the fuck?
Some part of me thinks that I have snapped. That whatever bit of crazy I have inherited from my mother has battled its way to the surface and is all set to drag me back under.
Except I don’t believe that. This doesn’t feel like crazy—which is a ridiculous rationalization, when you get right down to it. I mean, if you are losing your mind, chances are you believe that you’re perfectly sane.
Even so, I am not worried about my sanity. And, frankly, I don’t have time to be concerned about my laissez-faire attitude toward these strange goings-on. Time has snapped back into place, and there is a body falling to the ground, and Brayden has my hand and he is yanking me toward the back of the alley where, presumably, there is another way out.
We don’t even make it one step.
The warrior holds up a hand, and the air seems suddenly charged. It rolls toward us in waves, its force knocking us both backward. Me against the brick wall and Braydon to the ground. I see him hit his head, and I cry out, afraid he’s been knocked unconscious, but the air is so thick that the sound can’t even travel.
Then the wave dissipates and I’m left gasping as the warrior approaches me, that strange, sword-like weapon tight in his hand.
I tilt my head back, breathing hard.
I realize with some surprise that I’m not scared. On the contrary, everything seems oddly familiar. Like deja vu on steroids.
And in that moment, I am certain that the fierce looking warrior with the sad gray eyes is going to kill me. More than that, I’m certain that he has killed me before, which really makes no sense whatsoever.
I open my mouth to beg him to stop, but that is not the word that comes out.
Instead, I hear myself saying, “Malcolm?”

My Review
So I loved Raine and Callie's story which meant I totally wanted to read more from this awesome series. We met Mal but we only heard about Christina. Well there's a lot more explained about their world and how everyone came to be here and what happened with Christina and Malcolm. And boy is it heart wrenching and full of sexy passion. Hold on to your seats, grab a tissue and hang out by cold water because you'll simultaneously need all three lol
Mal has had it pretty rough having to do what he's done over and over again to the one person he loves the most. He's definitely an alpha male but he's vulnerable and sweet and a little broken. Christina is a good bit of a mess but with completely understandable reasons. Wait til you hear her stories. I loved that these two finally get their blissful moments.
I love this story line and how the world and their magic is created. This series is gunna suck you in and you'll never want to let go. I look forward to more in the next book!! :) 5 FIERY PAWS!

J. Kenner (aka Julie Kenner) is the New York Times, USA Today, Publishers Weekly, Wall Street Journal and International bestselling author of over seventy novels, novellas and short stories in a variety of genres. Though known primarily for her award-winning and international bestselling erotic romances (including the Stark and Most Wanted series) that have reached as high as #2 on the New York Times bestseller list, JK has been writing full time for over a decade in a variety of genres including paranormal and contemporary romance, “chicklit” suspense, urban fantasy, Victorian-era thrillers (coming soon), and paranormal mommy lit. Her foray into the latter, Carpe Demon: Adventures of a Demon-Hunting Soccer Mom by Julie Kenner, has been consistently in development in Hollywood since prior to publication. Most recently, it has been optioned by Warner Brothers Television for development as series on the CW Network with Alloy Entertainment producing. JK has been praised by Publishers Weekly as an author with a “flair for dialogue and eccentric characterizations” and by RT Bookclub for having “cornered the market on sinfully attractive, dominant antiheroes and the women who swoon for him.” A three time finalist for Romance Writers of America’s prestigious RITA award, JK took home the first RITA trophy awarded in the category of erotic romance in 2014 for her novel, Claim Me (book 2 of her Stark Trilogy). Her books have sold well over a million copies and are published in over over twenty countries. In her previous career as an attorney, JK worked as a clerk on the Fifth Circuit Court of Appeals, and practiced primarily civil, entertainment and First Amendment litigation in Los Angeles and Irvine, California, as well as in Austin, Texas. She currently lives in Central Texas, with her husband, two daughters, and two rather spastic cats. 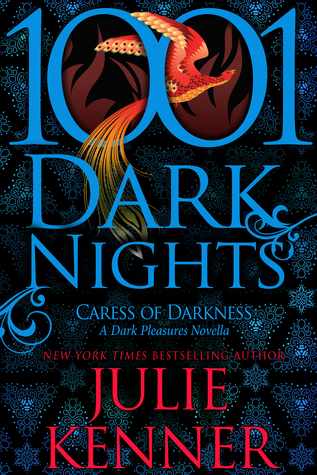