Welcome to my stop on the Twisted Sisters blog tour! 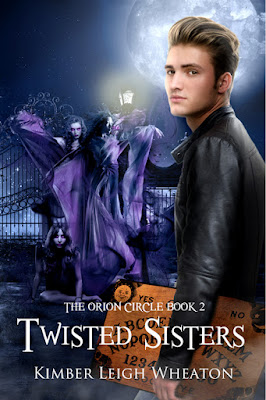 While playing with a spirit board, two sorority sisters summon the vindictive spirits of three women brutally murdered by a psychopath. Join Logan, Kacie, and the rest of the Orion Circle as they delve into the disturbing
events of the past to find the key to freeing the spirits.

But this isn’t any ordinary haunting.  These ghosts were banished before, and now they have returned more powerful than anyone could have imagined. Anger breeds hatred and hatred leads to darkness—these phantoms are on the verge of losing their last spark of humanity and becoming completely lost to the shadows.

Can Logan and Kacie convince the tortured souls to embrace the light and move on, or will the spirits succumb to the hypnotic pull of evil, leading to an eternity of torment and suffering?


I sense movement, and in the next moment Tracy throws herself at the barrier, a screaming, howling banshee. She fights against the magic barring her. Static electricity sparks through the room, zooming around, visible in the darkness. I push Kacie behind me as the manic ghost continues her relentless assault on the barrier. A deafening boom reverberates through the room,
followed by a wave of energy. I push Kacie down, falling on top of her to
shield her from the ghost’s wrath. Pain lances up my back like thousands of cat
claws, making me cry out both in shock and pain. I glance back—Samson and
Delilah hiss their displeasure at Tracy, their claws digging into my back.
The claws retract when I yell at them, and all the other pain surfaces. Ignoring the throbbing in my ribs, I roll to my side to free Kacie, sending the cats leaping away. Tracy lets out one last anguished wail before slumping and falling to the floor. My familiars circle her prone body, mouths open, scenting the air. The heaviness in the air lessens, but I continue to take in shallow breaths to keep from aggravating the pain. I watch Tracy, searching for… well not signs of life, but existence? Her form flickers like an old movie, and I wonder if she’ll just wink out of existence.
“Is she…” Blake trails off, pushing himself up on his elbows. “That was quite a blast. You both okay?”
“Yeah,” Kacie says, rubbing her head.
“Where’s Mr. Kincaid?”
“Out here,” Mr. Kincaid says from the hall. “I got out just before the explosion.”
“Logan…” Kacie pulls on my arm while pointing at Tracy’s prone form. “I’ve never seen, I mean, she can’t…”
“Her spirit would’ve disappeared if she was destroyed.” I try to struggle to my feet but give up, sagging back down. Kacie leans against me, and I wrap my arms around her.
Blake eyes us. “You two are not okay.”
“When Tracy forced the barrier, she released a lot of psychic energy,” I say, resting my cheek on Kacie’s head.
“It drained all of us, not just her,” Kacie adds.
“I feel fine,” Blake says stretching his arms over his head.
“Yeah, why is that?” I ask, unable to hide the genuine surprise from my voice.
“Rebecca will be thrilled,” Kacie says.
Blake raises his brows. “Why, she like stamina?”
Kacie giggles. “Get your mind out of the gutter, Blake. She likes researching puzzles.”
“Oh, no. I ain’t no one’s guinea pig.”
Tracy’s spirit releases a soft sigh, like a light exhale of breath… if ghosts could breathe. She floats to her feet as though controlled by invisible strings. Still solid, her dark eyes scan the room. A smile crosses her face when she realizes that she made it through the psychic barrier. All I can do is stare at the ghost and wonder what that mysterious smile means. Maybe she’s as drained as we are. Kacie squeezes my hand, her aura flickering from exhaustion. I meet her gaze. Evade and stall for time to recover—I try to send the message to her in my expression.
“Now that you’re in here, love,” Blake says, gesturing at the room. “Care to share why you wanted in so bad?”
Tracy blushes at Blake’s obvious flirting. I had no idea a spirit could blush, even one who appears as human as she does. I mean, it takes blood to blush, right? More manipulation? She glides to one of the beds and reaches out to it. Her hand goes straight through. When she tries again, she lets out a frustrated growl as her hand once again passes through the mattress.
“I can’t touch anything?” she says, her words sounding more like a question than a statement.
One moment she’s by the bed and the next she appears inches from Blake’s face. He doesn’t flinch, which I have to admit is rather impressive. I’m pretty sure even I’d have reacted to her sudden appearance.
“Are you really a werewolf?” she asks, leaning so close they’d touch were she human.
“Yep.” Blake manages a blank face as the ghost circles him.
“Shift for me.”
“It ain’t a full moon, love,” he says, shrugging his shoulders. I’m well aware that Blake can shift whenever he wants. He’s a born alpha werewolf, not a bite victim. Blake’s features take on a look of complete innocence. Damn but he can rival Kacie and Daniel in the acting department. “Why’re you deflecting attention from that bed? What’s under that mattress?”
“Nothing,” she says, backing away, shaking her head furiously.
“Now we both know that ain’t the truth.”
Blake saunters over to the bed and lifts the mattress.
“No!”
“Now what have we here?” Blake tosses a  small book to me.
I open the book and flip through the pages. “It’s a journal.”
“It’s mine!” Tracy howls, making a grab for the book. But her hand passes through. She may have enough power left to look almost human, but not enough to manipulate physical objects.Kacie takes the book, hugging it to her
chest. “This is very private, but it could also be what’s keeping you from
moving on.”
Tracy’s form flickers and sinks to the floor. She returns to an ethereal, misty spirit, and I can’t help but notice how much lighter she is now than before. Swirling white and light gray misty energy compose her figure, a sure sign that she’s close to acceptance of her fate.
“I’ll talk, but just to you,” she says, pointing at Kacie.
“No,” I say, unwilling to leave Kacie alone with this dangerous adversary.
“Of course,” Kacie says, directing a glare at me.

Ok, so I fell in love with book one. Seeing Kacie fight for herself to understand her abilities and use them for good when her whole family has made her feel bad for having them, and overcoming such disappointment, and only to come out on top of death was awesome. NOW.... this one maybe even more complicated that the first. It's not just Kacie's abilities that are needed, and when something flashes that could prove deadly to another team member it's a race against time to fix the problems before someone else is lost.
So, Kacie is a strong girl. She is learning so much and maturing. And her relationship with Logan is so sweet. Though for a moment, there was a big snag. I almost had a heart attack. It was also great to see this two teenagers have better communication and talking skills than most adults. Logan is growing too, he has become such a lovable character. I also like Daniel and Blake. And I would love to see what happened between Logan and Blake in the past because I am dying to know those details. But I of course am always hot for the werewolf :) Now, as for the ladies of the team, I think they are all pretty awesome. And though they are different and don't agree on everything, they are still a cohesive unit that works well together. And I love that they are all there for each other, especially Kacie- since she's so new. And Angela... the Survivor. At first I felt bad for her, then I didn't like her, then I just wanted to sob for her. She really did have the worse torture of them all, because she lived to see everything and the guilt tore her apart.

Let me say first, that this is really creative in the way the plot was lined out. I never would have thought of anything like this. The evil professor, the sorority sisters, the torture and manipulation. I was seriously mind blown. And hot damn if this story wasn't magnificently put together. I mean, I was completely captivated with how everything fell into place, but I didn't realize how everything played out until the end. I loved that. It was unpredictable. And the writing is flawless. There are too many nice words that go with this book. I was also very grateful to see more of the other's powers and how they use them, and learn a little bit about each character, not just being the team member, but the personalities too. And now we have a little dilemma, with Kacie's mom wanting to come around, Logan having new familiars to hang out with Poe, and that little "thing" with Daniel. Oh man, I absolutely cannot wait to see where the author is going to take me with the next book. I seriously love her writing and I am completely invested in this series and it's wonderful characters! 5 GHOSTLY PAWS!!! 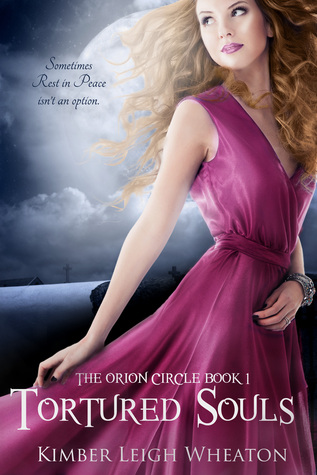 My 5 PAW review for book one is here! 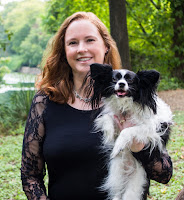 Kimber Leigh Wheaton is a bestselling
YA author with a soft spot for sweet romance. In addition to writing, she works
as an editor for two publishers, as well as select indie authors. She is
married to her soul mate, has a teenage son, and shares her home with three
dogs and lots of dragons. Kimber Leigh is addicted to romance, video games,
superheroes, villains, and chocolate—not necessarily in that order. (If she has
to choose, she’ll take a chocolate covered superhero!) Winner of the 2014
Rising Star Award at the BTS Red Carpet Awards in NOLA & a Silver Medal for
YA Mystery/Horror in the 2015 Moonbeam Children’s Book Awards.