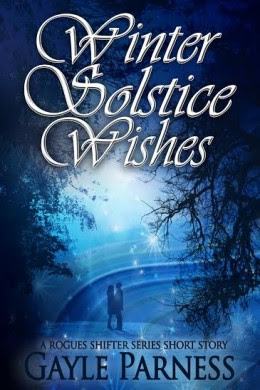 Purchase: Amazon | Barnes & Noble | Kobo | iTunes
Elle, a fae female, has refused to return to the Faerie Court because of the treatment she endured under the former queen, Fionna. She's been a guest in Sasha's home for the last few months, and is finally beginning to feel comfortable in this new world—finding herself drawn to the gentle warrior, but not worthy to stand at his side.
Sasha, a vampire with a violent past, is smitten by this sweetly elegant female, but has demons of his own to dispel. When Elle invites him to a magical celebration, he jumps at the chance to spend time with her. But can they heal each other on the Winter Solstice, the longest night of the year?


Also in the Series

Growing up in Los Angeles contributed to Gayle's love of all things fantasy and science fiction, particularly movies, books, and live theatre. She's worked for many NYC community theatre companies over the years and has been writing Young Adult Fantasy and Paranormal Romance novels non-stop for the last six years. A hybrid author, Gayle has self-published three ongoing series: Rogues Shifter, Triad & Theta, and her one published novel, Dying for a Bite, a paranormal menage, is available under her pen name, Marie Booth. When she's not writing she's running spotlight for a local opera company, singing in choruses and dancing in Zumba class.