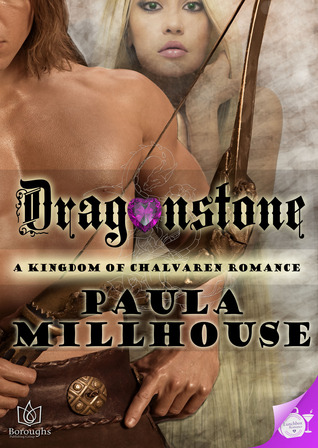 This is the prequel of Chalvaren Rising where we meet our main characters- Prince Kort, Princess Mia, and Dragon Magnus. They are important to this series and you get to see upon meetings, and things get chaos-y, how much you're willing to do and give up to save something that has meaning to you. It's a short story, but is not missing or lacking. It's complex, hawt, and magical.

When baby dragon Magnus is stolen in his egg before he's hatched from Chalvaren, Prince Kort crosses portals and worlds to rescue Magnus. And surprise, Magnus has hatched and took off in the forest. And he stops at Mia's house. She's an elf hiding in the human world. And none of them knew how important Magnus's decision to bring Kort to Mia really was.  And to make matters worse, the humans don't like the elf, so they are coming for her. Kort must make some choices as well as Mia. Is Kort willing to give up much to help rescue both Mia and Magnus, and is Mia willing to give up her home and everything she knows to help Kort and Magnus. Mia is sweet and innocent, Kort is generous but of course Alpha and dominant, Magnus is just awesome!! It's definitely a beautiful addition to help add to the series. 5 Dragon PAWS! 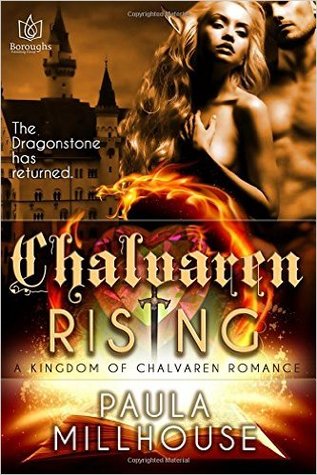 When Mia Ansgar follows Elf Prince Kort Elias back to the Kingdom of Chalvaren she wants her happy ever after, but Mia gets blindsided in a war where sorceress Isa Ansgar targets everything she loves with black magic and a legion of wraith-possessed elves, with the kingdom of Chalvaren as the prize.

Kort’s fallen hard for Mia, but despite their passionate new love affair, how can he possibly protect her when she refuses to listen to him? Not only does Magnus imprint on Mia, she insists on using the powerful magic of Chalvaren’s ancient artifact, the Dragonstone, to stand up against the threat of Isa Ansgar.

Isa wants the Dragonstone’s magic to raise a powerful wizard from the grave so she can claim Chalvaren for herself. But, when she attacks Castle Elias and kidnaps Magnus, she sets in motion a revolution of magic where the elves of Chalvaren band together to stop her malicious crusade. Will Mia convince Isa to turn away from darkness and rejoin the light before it’s too late?
Chalvaren Rising Keynote:
With the love of Kort Elias, Chalvaren’s warrior-prince heir, Mia Ansgar will seize her birthright and become the great dragon-riding wizardess prophesied to free that elven kingdom from her embittered sorceress kin.

Twenty-five years ago, Theo Ansgar abandoned the Kingdom of Chalvaren for a hiding place on another world. Some called him traitor. Some, thief. Now his fully grown daughter Mia must return to the land of her birth…and their war.

It was the elf prince Kort Elias who brought her back. Theirs was an instant connection, an inescapable union of body, soul and sorcery, reminding Mia of what she truly is, and what she must become. There is also Magnus, destined to be more potent than any wyrm Chalvaren has ever seen, a three-day-old dragonlet Mia must nurture and then ride. And then there is the Dragonstone, an artifact of power nonpareil. Joined, they can tip the scales of battle against the wraith-possessed forces of darkness, of Mia’s own embittered kin.

Redemption will be offered, the protected will become the protector, and an ancient prophecy will come to fruition, but only righteous love can conquer all.

Wow! Well, things are a little crazy in Chalvaren. When Kort, Magnus, and Mia land back home from the doom in the human world, things hit the fan. Prince Kort will do anything to keep Mia with him, he knows he needs her by his side. Mia feels a major connection to Kort but she has so much to learn and somethings he hides things so she has doubts. Magnus just wants to be near Mia. He's bonded to her. And they all have a lot to learn, not just from each other, but from those around them. And the twists that will blow your mind.

Mia, who is clueless to so much in Chalvaren, grows into a beautiful heroine, dragon rider and princess. She had doubts and a lot of bumps along the road, but she is a flawless character. She was lonely and just wanted to belong, and wanted a family since she lost hers. She didn't even have real friends other than a human child where she was. As she learns things, she becomes confident and loyal and brave. She is the key to it all. She uses her curiosity to learn so much. I loved her bond with Magnus and I really liked her relationship with Prince Kort.  Prince Kort had to learn that he cannot control everything. He needs to let go and let others. He also had to learn that he needed to support Mia without over powers her with dominance. He helped her become her better self in the end, but he's learning how to grovel LOL  Yeah that was hard for him. And this prophecy that is being held over their heads is a little crazy. Magnus is growing into a magnificent creature of awe.

I loved all the dragons. They are fascinating and so well done and it was magnificent. And the bad guy, well, sometimes you just can't comprehend how much loss and grief can make you go off the deep end. This story is full of love and action and romance and hope. The world building is beautiful, the dragon creations are flawless. And I am absolutely a fan! I must have the next book to see where it can go, and no worries, no major cliff hangers or anything like that. I LOVED IT! 5 MAGICAL DRAGON PAWS!

Paula Millhouse grew up in Savannah, Georgia where Spanish moss whispers tales in breezes from the Atlantic Ocean, and the Intracoastal Waterway. As a child, Paula soaked in the sunshine and heritage of cobblestones, pirate lore, and stories steeped in savory mysteries of the south.

Paula lives with her husband at the base of the Blue Ridge Mountains with their pack and pride of furry babies. In the southern tradition of storytellers, she loves sharing the lives of her characters with readers, and following her muse on the quest for happily-ever-afters in thrilling romantic fiction.

Find the Author on Social Media: