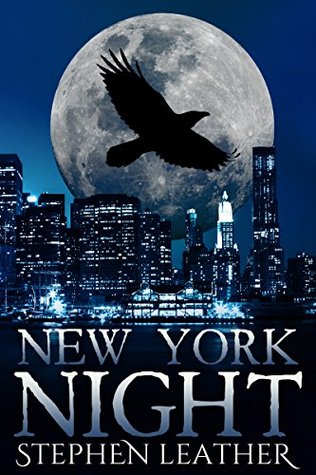 Blurb/Synopsis of Book
Teenagers are being possessed and turning into sadistic murderers. Priests can’t help, nor can psychiatrists. So who is behind the demonic possessions? Jack Nightingale is called in to investigate, and finds his own soul is on the line. New York Night is the seventh novel in the Jack Nightingale supernatural detective series.
Jack Nightingale has his own website at www.jacknightingale.com

'Another great thriller from Stephen Leather but this time with a devilish twist!' James Herbert

'Written with panache, and a fine ear for dialogue, Leather manages the collision between the real and the occult with exceptional skill' Daily Mail

Well, first, this is the 7th novel of the series, but I haven't read the others. Any of them. But no worries. I know that there are things I should know from reading the other books, but I also didn't feel like I couldn't get anything without them. It was well introduced in a way to make you feel like you weren't missing too much, and I like when an author can do this. Now, Jack is a working for Joshua Wainwright- a billionaire, who is a magical adept. He pays Jack to help his sort out some of the nasties that go bump in the night. Josh is an intriguing character and I'm not sure if he's a good guy, a bad guy, or what, but I can tell he's important by how Jack works for him and talks to him. So Josh sends Jack to New York, from the UK, to find out what's happening to a bunch of murdered people. There's a symbol that's demonic carved up in each victim. Josh also sends him to meet Cheryl, who like Jack, was a cop and is now a PI. But while he gets Cheryl to help him, he also has to keep her in the dark about all the things that are supernatural that she doesn't know about.

This plot line was really cool. It was fast paced, full of magic and chaos, and a lot of mystery that kept the suspense in play. I loved that I didn't know what to predict about what was happening and who was behind it all. And it's definitely got the thriller part down with all the deaths and creepy demonic things. And I like that Jack is funny and weirdly superstitious. I mean, he's surrounded by magic, so superstitions shouldn't be so... common LOL.

I like the author's style of writing as well. It kept me on my toes, and had me turning the pages. I think I need to go backwards and read some of the previous books in the series to see some of the past happening, but overall, I really liked this one. I think it was pretty fun to read and see how it all turned out. If you like supernatural mysteries, good suspense, and thriller type plots, I definitely recommend this one. My one complaint, there are just some things UK people say and do that Americans don't, and that made me cross my eyes but giggle. I expected it from Jack, but not the natives. But nothing terrible so don't let my little nonsense discourage you. :) 5 PAWS

New York Night is the seventh book in a series about Jack Nightingale, supernatural detective. Teenagers are being possessed and turning into sadistic murderers. Priests can’t help, nor can psychiatrists. So who is behind the demonic possessions? Jack Nightingale is called in to investigate, and finds his own soul is on the line. The first five Nightingale books were set in the United Kingdom but last year I moved him to the United States and I’m having fun moving him from city to city.
My uncle was a writer, mainly for classic TV shows in the 1960s such as The Avengers, Department S, Jason King, and The Champions. I think seeing him work first attracted me to writing as a career. For ten years after leaving university I was a journalist working for newspapers such as The Times, The Daily Mail and The Daily Mirror. I loved being a journalist but I always wanted to write fiction.
I wrote my first book while I was a journalist on The Daily Mirror in London. I had worked in Scotland for four years on the Glasgow Herald and my first book Pay Off reflects that. It has a Scottish hero and takes place mainly in Scotland. I was a financial journalist and the book does have a financial plot. Collins – Now Harper Collins – bought it for a very small amount of money, but my career as a writer was up and running.
Most of my regular thrillers are based on things I have either seen myself or have been told by my contacts in the police and intelligence agencies. Those books are very much based in the real world, but the Jack Nightingale books are a little different. As they involve devil worship and the supernatural they tend to be more a result of my imagination. That’s my story and I’m stocking to it!

In the Jack Nightingale books it’s Jack himself. I love his sardonic sense of humour and his resilience. In my Spider Shepherd books, it’s Spider’s sidekick Jimmy ‘Razor’ Sharpe who is very un-PC in his opinions, though his heart is in the right place.
Generally I take the physical appearance of one person, the speech patterns of another and the opinions of a third. By mixing them together you get a new character. Jack Nightingale has the look of a young Mickey Rourke in my mind, talks like a cop friend of mine and his sardonic view of the world is similar to a guy I was at school with.
New York Night is the seventh book in the Jack Nightingale series and there will be more! The next one should be Miami Night.
A book called Dark Forces, the thirteenth book in the Dan ‘Spider’ Shepherd series. Shepherd works for MI5, though in previous books he worked for the police and the SAS. It’s about an Islamic State terrorist outrage in London.
I try not to kill off characters, unless they are villains in which case they were created to die! Fifteen years ago I made the mistake of killing off a major character who had appeared in three of my books and I always regretted it.

I am a huge fan of Jack Higgins, John Le Carre and Gerald Seymour, and in the world of self-publishing I am in awe of Joe Konrath,

I would check more carefully for typos and mistakes!

I tend to be a bit slapdash and spend a lot of time looking for typos and stupid mistakes! I catch a lot, and so does my editor, but some always seem to slip through.

The wonderful Debbie at www.thecovercollection.com She has done many covers for me and is a joy to work with. We throw ideas back and forth and then she comes up with a great cover.

I spent a lot of time looking at a map of New York, I have visited the city many times but I needed reminding of where everything is.


I love Proserpine, a demon from hell, and I would love to be her, just to have the power that she has. Plus I like her sense of humour. She often says things that make me laugh out loud!

I don’t believe in telling anyone what to read, but my favourite book of all time is One Day In the Life Of Ivan Denisovich by Alexander Solzhenitsyn. I’ve read it many times and it always inspires me.
Dean. I’m an older brother too.

Thank you for reading my books, and for being so supportive. Without readers, writing is a pointless occupation.

E. Beach or mountains? Mountains.
L. Bad boy or good guy next door? I try to be the latter but somehow I always fall short and end up the former. 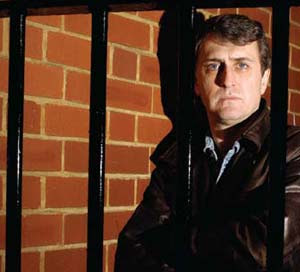 Stephen Leather was a journalist for more than ten years on newspapers such as The Times, the Daily Mail and the South China Morning Post in Hong Kong. His bestsellers have been translated into more than ten languages. He has also written for television shows such as London's Burning, The Knock and the BBC's Murder in Mind series. For much of 2011 his self-published eBooks - including The Bestseller, The Basement, Once Bitten and Dreamer's Cat - dominated the UK eBook bestseller lists and sold more than half a million copies. The Basement topped the Kindle charts in the UK and the US, and in total he has sold more than two million eBooks.
Posted by Unknown at 2/11/2016 12:00:00 AM