Secrets of the Moon by Kristy Centeno! 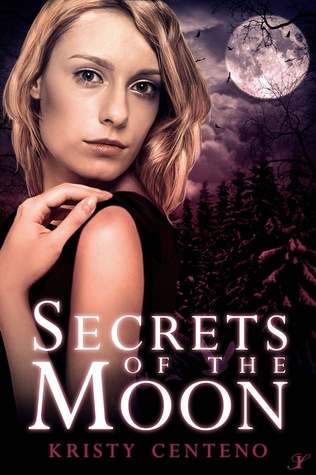 Book Description:
Teenager Marjorie Emery eluded death. As she struggles to get her life back on track, she believes her efforts are paying off. Yet, when a black dressing, unfriendly, and incredibly handsome hottie walks into her classroom, she’s forced into a tailspin. Marjorie has no idea how much his presence is going to shatter what little tranquility she’s achieved.
Kyran Rousseau’s gloomy nature has a name, one that is potentially fatal under the right circumstances. His family harbors secrets and does everything to protect Kyran. While, he does’t want to ruin Marjorie’s normal life, love has a way of changing his plans.
Falling for Kyran is the least of Marjorie’s worries. With a faceless threat hunting her and a boyfriend who's as dangerous as he is good looking—how can Marjorie and Kyran keep all hell from breaking loose before it’s too late?

The bat connected with something solid, and a soft grunt escaped the man’s lips, followed by a soft oath that would’ve put even the meanest of sailors to shame.

“Are you trying to kill me? What the hell are you doing?”

Wait just a second, I know that voice.

“Kyran? Kyran!” I couldn’t believe my eyes. He really was standing there, clad in nothing but a pair of jeans.

“Are you trying to behead me?” His expression was one of puzzlement and anger combined.

“I was, actually.” He rubbed his forearm vigorously and I deduced that was where the bat made contact. Boy, I had the worst aim ever. How did I manage to hit his arm when I was aiming for his head?

That did it. That tone he used infuriated me all over again. “Oh, hold on just a second here. I should be asking all the questions, not you. What the hell are you doing roaming around my house in the middle of the night anyway? What kind of sick pervert are you?”

“This isn’t your house. Haven’t you noticed we’re in the middle of the woods?” God, I wanted to slap him so bad.

“The hell we are! This is my father’s land and you’re trespassing.” He scoffed, and I had the sudden urge to go for a second blow. This close, I was pretty confident I would make a crude indentation in his skull.

“Do you enjoy peeping at other people? Is that, like, something you get off on?”

Had I not been so angry, I would’ve laughed at his expression. His face registered shock, disbelief, and surprise all at once.

My Review
Well now, this is such an interesting story!! I love werewolf stories and this is no exception! A great plot line with fascinating lore and a little twist of the not so nice kind :) and oh, some great characters!! :) plus HAWT accents lol :)

Marjorie Emery was in a car crash with her friends. She and them made stupid decisions and now she's paying a price. road. She and her friends came out alive,  but not everyone came out ok. Now, a year later, this is where the story really starts! There's a foreign new family who's moved into town and one brother has majorly taken an interest. The back then Marjorie was popular and carefree. The now Marjorie is strict and a little more uptight. Plus she has the friend who blames her for the accident. But the new family, their gunna open a whole can of worms for Marjorie and I'm not so sure she's prepared for it!

Kyran is quiet, reserved, serious, sometimes a jerk. Alexis is his twin and polar opposite. You'll figure out why just like Marjorie but not too soon. I loved this little twist because not everything can be easy. When things start going bad, animals horribly mutilated, people missing, crimes occurring, things are starting to add up and Kyran can't hide everything form Marjorie. Especially since the bad guys are taking their own look at her.

The characters are my favorite. They are just awesome! Kyrans family, Marjorie's friends, her parental situation and cute siblings. My dislike is the lack of complete outrage and devastation to the horrible things. Dude my animals are my life, I would lose my mind!!! Also, I wanna know who the bad guy is!!! Lol :) but thank goodness there's another book. And one more time- why do girls have to be stupid. Oh let me follow the monster who just killed my horse into the woods. Oh let me go outside by myself when I know bad guys are stalking me. Ummm let me just slap her several times for that and maybe I'll get over her stupidity. Seriously!! I live on a farm- that don't happen!! Not like that! Hahaha sorry just my little rant!

I really liked the writing and I love the creation of werewolves and the little loophole of crazy :) the characters are complex and that makes them real- I know girls like Marjorie and Tracy and the others :) I also see there being an almost love triangle and I'm not sure how that's gunna play out. I sense some things but I'm gunna read book two before I comment on a team :) and the bad guys-- I have a serious idea but I'm also holding out. This book is great and I absolutely love the creepy feel! I can't wait for more!! 5 CREEPTASTIC WOLFY PAWS!!