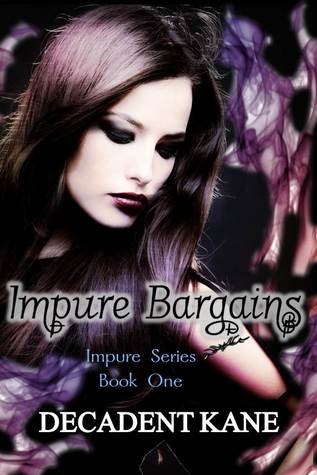 Desiderus has served Ba'al faithfully for nearly one hundred years. When Haven Rowe put a gun to his head and pulled the trigger, her fierce nature stirred emotions he hadn't felt since before Ba'al claimed him. With his sight set on consuming her body and soul, he'll use every deceptive idea at his disposal to make sure she belongs to him.

When Haven walked in on a demon stealing her brother, Jeremy, her entire world unraveled. Born to a family of magic users, yet unable to use magic of her own, Haven will do anything to get her brother back from the depths of hell, even if it means she has to bargain her soul.

With the help of a witch, Haven seeks out loopholes to the soul bargains that have been made. She either finds a way out for her and Jeremy, or they both might be lost forever. What she doesn't count on is the betrayal of her own body and the insurmountable attraction she has for the demon she's trying to escape.

Available in Kindle and Paperback

Excerpt:
Surprised by the female's actions, Desiderus watched her run for a moment before his mind registered her actions. Her obsidian hair flew behind her with a strange bag slung over her small shoulders. In a way, he should have known Haven would bolt. Experience all but told him that. Many had run and failed. Desiderus shook his head and a grin spread across his lips. She wouldn't get far and not just because she was naked. He had a pretty good idea that Haven didn't worry about her loss of clothes as much as she worried about what he might do to her. He would have loved nothing more than to chase after her...but she needed to be taught a lesson, to understand what it meant for him to have her name, for him to be in control.
After quickly making Ba'al's sign in the air in front of him, a toad with a circle, magic flickered into the sigil like sparking a match. The sign brightened to an orange color. Desiderus had been a demon so long it took seconds to create. Under his breath, he let her name roll off his tongue in one easy motion, "Haven Rowe."
The color of the sigil sprinkled away on a breeze and black smoke swirled. Haven's image slowly began to appear, little by little, tantalizing, as if she somehow knew he wanted her body, far more than he had any other mortal female. Her legs came first, the lazy curve of her hips, he groaned with the swell of her heaving breasts, and finally her face construed in a perfect scowl piercing him with those damn blue eyes.
"Running will do you no good, Haven." Inside lust coiled around his core, urging him to do anything but stand there looking staring. Her skin shimmering with sweat, making his tongue slip out to lick his lips. He swallowed a groan at the thought of tasting her tanned flesh. Lost in his erotic notions he didn't see her foot until it was too late and a sharp jolt of lightning like pain raced up from between his legs, shooting over his spine and slamming into the base of his brain. Colors formed in his eyes and he blinked it away as his stomach churned. His knees weakened, but he kept himself standing somehow, adrenaline replacing the pain as anger mounted inside him like a lion.
"But that does demon." Haven turned to run for the second time and despite the throbbing radiating from his balls, Desiderus reached out for her, latching fingers around an ankle that had come up from the ground and Haven fell front first into the dirt with Desiderus falling on top of her.

The care and feeding of a pet imp.

A derelimpiticus (Imp for short) is a magic underfae dweller set to be guardians of certain bloodlines. The small winged creatures draw magic from the underfae and use it to help their humanoid family magically as well.

They need a bonding partner or object to survive in the human world. They also need magic so trips back to their dwelling is a must.

The do's of imp owner ship:
1: Get to know your imp as each one has their own unique personality and magical traits. This will help you figure out which traits will help you as a magic user. It will also let you know how often your imp needs to travel back to the underfae to recharge.
2: Make sure your imp has a grimoire to associate his or her power with. While being bound to a bloodline is required, the grimoire associated with that bloodline will help your imp learn restraint and magic spells to better assist you.
3: Play with your imp, as they often will get bored and find their own ways to exert energy. If you leave one to his own devices, you may end up with bleach in your shampoo bottle as the little pet tries to amuse himself.

The don'ts of imp ownership:
1: Never trap your imp in the grimoire. This leads to magical nullification.
2: Never let your imp mate, as mating leads to babies and a house full of imps is worse than mice. They will take over and destroy everything for fun.
3: Never let a demon get a hold of your imp.

As a final note, an imp owner should always be conscious of how the imp sees him or herself. They do not relate to themselves as pets, so directly calling them a good little pet will likely result in impish behavior you won't be able to control. That imp like behavior is best suited to enemies...
About the Author: Decadent Kane, author of the trouble with elves series, writes paranormal romance with heat. She lives in Wyoming with a full house: 3 dogs, 1 cat, 1 guinea pig, 1 rat, 2 kids, and 1 fiance.

An elfess in human form, Decadent enjoys dipping her fingers into the human realm where she took pen to paper and began the tales of the trouble with elves. Her obsessions include reading, Dean Winchester, and honey.

She will devour your soul with glimpses of the feral ridden drow elves, with their dark skin and soul consuming. She'll sneak morsels of naughty thoughts to you via goblins, and seduce you into stepping inside the elven realm where females disappear when lust takes over among other elfish troubles.

But never look a drow elf king in the eyes...