The Good Girl’s Guide to Being a Demon by April Aasheim! 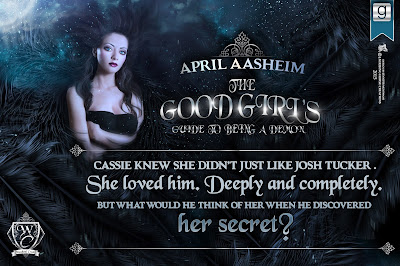 The Good Girl’s Guide to Being a Demon


Word Count: 42,000
Cover Artist: J.M Rising Horse Creations
Book Description:
Strange changes are happening to Cassie Walker. She’s losing track of time, seeing shadows, and developing…horns?
Fearful, she returns to her childhood home to solve the mystery of what she’s becoming. There, she meets up with childhood friend, Josh Tucker, who convinces her to enter the annual Demon Run in Woodland Creek.


But things aren’t always what they seem in Woodland Creek, and people aren’t who they appear to be.


Soon, Cassie finds not only herself in danger, but Josh as well.


Can she save them both? Or has her lineage tainted her forever?


The creek churned, black and thick as tar under the cloak of night.


Cassie Martin stumbled along the raging waterway as she searched for the North Star, Polaris––the star that would guide her home.


It was in the tail of one of the dipper constellations, she remembered, but which one? She tried to call it up as she ambled along, while her ears listened uneasily to noises created by the dark: howls and heavy footsteps, scurries and whisperings.


To her right there was smoke accompanied by the crackling sound of a roaring campfire. She wanted to run to it––to tell whoever was tending the s’mores that she was lost and afraid and could they please escort her back to her cabin?


But fear kept her out of the woods. She had read enough books to know the woods were full of bad things––bears and werewolves and things that wanted to eat you. So she followed the creek, for lack of other options.


She shouldn’t have been so stupid, she scolded herself. She knew there was no such thing as a Snipe, but she went along anyway because her brother Kevin teased her about being afraid.


“Then prove it,” Kevin returned. “Go into the woods and find a Snipe. If you do, I’ll never call you scared again.”


Her best friend Jenn wrapped an arm around Cassie’s shoulders. “I’ll go with you, Cass. We’ll find that Snipe.”


Only their friend Josh seemed worried, elbowing Kevin in the ribs. “They’re only nine, dude.”


“So?” Eleven-year-old Kevin argued. “At nine we were sneaking beer out of dad’s cooler and watching late night HBO. These girls need to man up, Josh. We won’t be around to take care of them forever.”


“We can take care of ourselves,” Cassie said, sticking out her tongue. “We’ll get that Snipe. Then you’ll admit that girls are better than boys.”


“If you bring us a Snipe,” Kevin said, “I’ll admit anything you want.” He spit into his hand. Cassie spit on hers too. The siblings shook on it.


The problem was that Jenn disappeared shortly after entering the woods with her. Now Cassie was alone and disoriented. “Jenn!” she called nervously, trying not to awaken the bad things lurking. She hated it in here alone. She felt watched, as if the trees had eyes.


When she heard the sound of rushing water she remembered the creek ran behind her campsite.


She ran through the trees, half covering her eyes, and when she emerged in a narrow clearing she spotted her watery guide. The creek was swollen and bloated. It didn’t trickle. It gushed. In the dark it moved like a winding, creeping serpent on the hunt, ready to devour her.


“Kevin!” she called out, cupping her mouth with her hands. “Jenn! Josh?” Her words were met with a low mournful wail, followed by an even more frightening silence.


Her father once told her that if she got lost, she should find a spot and wait for someone to come. Spying a tree stump, she sat down. The summer moon was nearly full and several fireflies lent their talents to holding back the dark. It would have been beautiful, if she wasn’t so scared.


Another wail echoed through the night, bouncing off tree limbs and ringing through boughs. It was quickly followed by another. Banshees? Ghosts? Wolves? Tree branches rustled as if spirits played an invisible game of tag.


Dad will come, she told herself. He always came. He’d see she was missing and he’d find her––and Jenn as well.


The sounds grew louder, like the moans of old ladies crying at a funeral. Cassie shivered, wrapping her arms around her chest to shield herself from whatever came. Several twigs snapped nearby, followed by the sound of small, scurrying feet. With building fear, she bolted from the stump and raced along the water’s edge, following as it churned towards its unseen destination.


Soon the clearing ended and the woods began. She spun around, uncertain where to go. Back towards the moaning sounds or into the blackness of the trees?


Her decision was made when she saw them.


An army of them, dropping from tree branches and skittering her way. Their sizes were varied but their faces were all the same, dark expressionless blobs with unblinking eyes.


They were quiet as cats as they came for her, and more terrible than wild animals or werewolves or things that would eat you. The Shadow People didn’t eat you. They took you away.


Cassie fled in the opposite direction, away from the forest, screaming as she went. Her voice joined in with the chorus of wails, until it all became the sound of the wind.


Risking a glance back over her shoulder, her foot hit a sleek stone. She slipped and tumbled, falling into the cold raging water.


“Help!” She called out just before she was pulled under.


When she surfaced she caught hold of a branch extending out from the bank. She clung to it with both hands while her feet pulled her downstream. The creek gnawed at her, biting and ripping at her skin and clothes, chewing up one shoe and then the other. She couldn’t hold on for very long. At any moment she would be swept away.


Above her, she spotted the North Star.


“Mom,” she whispered, focusing her wish on the star as the water dragged at her and the Shadow People advanced. “If you can hear me, please send help.”


A figure sprang from the woods. A boy, not much taller than herself.


“Josh!” she called, kicking with her feet as water filled her lungs.


“Cassie!” Josh grabbed her hand just as she lost her grip on the branch.


He slowly pulled her from the river’s maw. She crawled onto the bank, coughing up water. He removed his flannel jacket and wrapped it around her shivering body. When she could stand again, she hugged him, nearly crying as she rubbed her nose into his chest.


“I don’t think there’s such thing as Snipe,” she sputtered.


He laughed and kissed the top of her head. “But you were brave to find out.”


Her father, her friend, Jenn, and her brother, Kevin, all appeared, hollering and racing in their direction.


“Thank God you’re alright!” Cassie’s father said, scooping her up in his arms. “You had me scared to death. You can’t go traipsing off by yourself like that, young lady! You’ve got to be more careful.” He lifted her chin firmly. “Promise me.”


Behind him, Kevin’s eyes were imploring. If she told about the Snipe hunt, her brother would be in big trouble. And possibly Josh, as well.


She nodded. “I’ll be careful from now on. I promise.”


“Good.” Her dad carried her back to their rented cabin but her gaze remained affixed on Josh. He walked alongside them, his blue eyes shining like the moon.


My Review
I thought this was such a fun read and a great addition to the woodland creek world. The main character broke my heart but still had so much courage to keep going and then had me cheering for her. I haven't read anything by this author before but I will now :)
Cassie lost her mom when she was 5, then lost her dad and brother on her 24th birthday. How unbearable and yet she seems to be decently ok. She's trying to do something with her life and she knows something's got to give. She remembers all her happy times when her dad, brother, his best friend Josh, and her best friend Jen, used to go camping out at Woodland Creek. She also remembers how Josh saved her life and she fell in love with him. So after receiving a few signs, she heads back to her past.
Cassie's got some crazy to deal with- she's got something demon going on, there's shadow people who follow her, nightmares she doesn't understand, and her shrink says she needs to face her demons- her shrink has no idea. Lol and then Cassie runs into Josh. Cassie wants to tell him she's loved him for years. And then they run into her old friend Jen. And things get really complicated.
I really liked this one. There's a great suspense that follows the mystery and the romance is well done because it built and had to work itself up. I was glued to the pages from the start and I enjoyed the whole thing. I liked all of the characters and the story was well written. I look forward to reading more from the author. 5 DEMON PAWS!!

About the Author:
April Aasheim is a full time writer with interests in the paranormal, the supernatural, and the metaphysical. Having ‘seen things’ at an early age, April has made it her life’s work to seek out the truth, and then to write about her findings in the guise of fiction.
She lives in Portland, Oregon with her family and is the author of the Amazon best-selling witchy series: The Daughters of Dark Root.