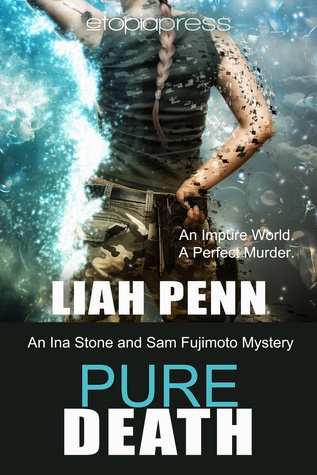 Book Description:
An Impure world, a perfect murder...A murdered society debutante, her body sprinkled with 89 Costa Rican butterflies. A headless, gutted corpse washed up on shore with a beautiful, dead teenager. The case is anything but straightforward, and in an uncertain future, where resources are limited and the genetically defective are banished to a ghetto territory for Impures, Chief Detective Ina Stone and her partner, rookie detective Sam Fujimoto, must cross into Pure Territory to find a killer. An Impure herself, Ina must overcome her defect. And when her life is threatened, she must learn to rely on Sam, whose interest in her seems more than just professional.
Yet the Pures may have created a world in which even they don’t want to live anymore. Resources have become too scarce to hide, and a black market for medicine comes to light. When a third murder is discovered, Ina and Sam know there’s a connection. With too many suspects and not enough time, they must find that connection before the killer strikes again.

My Review
Well, I wasn't expecting to like this one as much as I did. It's so cool and unique, because it should be labeled as a mystery dystopian book. Yeah I know that's complicated but it's what's so awesome. So, there was a big "war" and now, after, there's the Pure and the Impure. This all comes down to genetics, and the distinctions. And it's like a prejudice of race or anything that stupid, but now it's genetics. And wow, is it serious and creepy and all out scary to think about. And basically the Pures use the Impures to do jobs that they wouldn't dream of touching, no dirty hands- this includes murder solving.
Let me say that this book will hook you from page one. They mystery started immediately and then of course the dystopian element was added. And I can't spoil things but you will NEVER predict this one, I was a little mind blown! I kept thinking it was one thing, and then the author would twist something or give a false lead and it was crazy good. And I of course loved the world building. I happen to be the biggest fan of a supernatural book (dystopian here) with a lot of mystery. Man, this one is perfect for my alley of books!!

Ina is strong, brave, smart, and she can hide her secrets well- in this case, a birth defect that keeps her out of the Pures world. She is constantly reminded of what she can no longer have when she goes into their territory to solve murders for them. And so with that, she has a new partner-Sam- and they must figure out why Pures are dying.

The writing is fantastic! The characters are excellently developed and written. And of course I've already gushed about how much I liked the world building and genre mixing. Especially with how drastic the two sides are, the horrible dirtiness of the Impures and the fresh air, clean Pure side. And of course, I love the message that a person's character, not appearance or genes, should be judged. And there's enough intrigue and hints to make you salivate for book two. Or at least I am.  And this being the author's debut has me really impressed. I am jumping straight into book two!! 5 PAWS!!!

My Review is coming November 17th!!

Award-winning author Liah Penn is an attorney who practices law near New Orleans,
Louisiana.  A former prosecutor, she has worked in a major metropolis, an Indian reservation and on the Mexican border.  She is an accomplished artist and is active
in numerous arts organizations and boards in the New Orleans area.