The Blood Scion by Nazarea Andrews w Review and Giveaway! 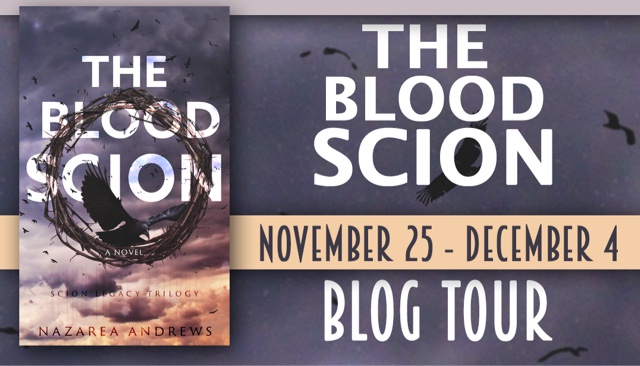 Today we are celebrating THE BLOOD SCION by Nazarea Andrews. It is the beginning of a brand new paranormal series from Nazarea, The Scion Legacy. Don't miss picking up The Scionless House, a novella in the series, because it is FREE!

Click here to add THE BLOOD SCION to Goodreads

I was just a reporter, trying to stay ahead of my student loans. I knew the rules, and I followed them.
I thought I knew how the world worked—humans lived their petty little lives in the safety of the sun. We loved and fought and—when the sun sank—we scurried behind our walls and lived in fear. That is when the monsters came out to play.
And even in the safety of the sun, we knew who ruled us.
The Houses. And their Scions.
Everyone knows the great Houses and their Scions—they are feared and loved and hated and envied. They are the gods who walk the shadows and rule all of our lives. They are salvation and death.
And somehow, I am one of them.

My review!
Well, I can't believe I'm saying this but I love a vamper! It's been a while since a vampire has had my good side but there's actually two in here!! After reading the prequel, I knew I would love Octavian but I find I love Sculla in this one, as well. He made me giggle while Tavian made me swoon. And of course they are hawt pieces!! And it's about to get complicated because Farley is not just any human, she's a human to be a scuon but was raised by humans with limited knowledge of the vampire world and she's supposed to save them. Goodness!
The characters are all fantastically written. While Jule, Marcus, August, Winston, and Patrolclus are side characters, they were just as well written as our main characters, Sculla, Octavian, and Farley. Now don't panic, I'm saying names and I don't think there will be any love triangles to come. But I loved to hate Jules and Marcus, with Winston and Patroclus being the more stoic serious kids, Sculla and August making me giggle and roll my eyes, and I was just begging for Ovtavian and Farley to make out!! Lol I know, it's just me.
The writing is fantastic, as always, I love how the writer can suck you in. I don't like vampires but I love this author so that should tell you how good her skills are!! The bad guys, the HRO, well, it's the human monsters that sometimes cause the most damage. I am so looking forward to more of this series! Ms Andrews has another great one for her list of accomplishments!! Well done! 5 PAWS!

Click here to add THE SCIONLESS HOUSE to Goodreads

Twelve Houses. Twelve vampire lines. We ruled from the shadows, and manipulated the world, and when humans came too close to destruction, we intervened.
Every House has a Scion. A fragile, easily broken human that stood shoulder to shoulder with the house Princes and Princesses.
Except for ours. The Ravens, House Cantelie.
We've been without a Scion for almost fifteen years.
But that will change...and her life will be mine to protect.

Get THE SCIONLESS HOUSE for FREE!

My Review
Strictly from Octavian's POV this gives you the backstory everyone loves to know. The whys and the who's and the what's it's! I love his voice and I am totally looking forward to how Farley is going to take this surprise since she has no idea about any of it. And I think I'll enjoy Sculla! 5 PAWS!!


a Rafflecopter giveaway
ABOUT THE AUTHOR:

Nazarea Andrews (N to almost everyone) is an avid reader and tends to write the stories she wants to read. Which means she writes everything from zombies and dystopia to contemporary love stories. When not writing, she can most often be found driving her kids to practice and burning dinner while she reads, or binging watching TV shows on Netflix. N loves chocolate, wine, and coffee almost as much as she loves books, but not quite as much as she loves her kids. She lives in south Georgia with her husband, daughters, spoiled cat and overgrown dog. She is the author of World Without End series, Neverland Found, Edge of the Falls, and The University of Branton Series. Stop by her twitter (@NazareaAndrews) and tell her what fantastic book she should read next.