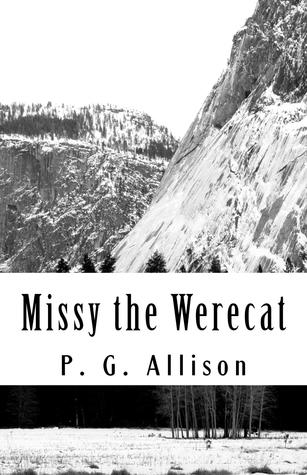 When puberty brings on her first Shift, Missy goes into the mountains for two years until finally learning to Change back.  She can Change from fully human in one instant to a mountain lion in the next.

Everyone assumes her two year disappearance was because she’d been kidnapped by a sexual predator that she managed to kill.  She keeps her werecat nature a secret. There is no pack, no pride of other werecats and no alpha.  She’s a girl with fantastic abilities growing up and learning to do great things in today’s world, amongst humans.  She only has her instincts to guide her and those drive her to train herself to extremes.  She must control those instincts; dampening the wild predator is often necessary.

Her raging hormones and enhanced senses require very strong controls; she explores what happens when those controls are relaxed.

Imagine a world where werecats at one time did indeed exist, but became extinct eons ago.  Then, because their recessive genes managed to survive and get passed on -- thanks to some rare unions with humans -- DNA with these special werecat genes continued down through the ages, further evolving and being inherited by a very small number of descendants.  And finally, imagine that two of these very unique individuals -- each one in a billion -- would meet, fall in love and become parents.  While three of their four children would be normal humans, one -- their daughter Missy -- would be very special.  She would be a werecat.
And thus, Missy the werecat was born in today’s era.  She’s not exactly the same as those ancestor werecats, but she does have many special abilities -- not the least of which is being able to transform, with a great shimmer of light and burst of energy, into another form.  She can Change from being fully human in one instant to being a cat animal in the next.  In her cat form, she has the same body mass as in her human form and fully retains her human intellect and memory.  And, in either form, she has all the instincts and abilities of a wild, predatory mountain lion.
Eventually, she will learn how to Change forms back and forth, and how to manage and control her special abilities.  Her genetic anomaly, combined with some evolution along the way, brings her cat endowments into her human form:  speed, strength, agility, and enhanced senses of smell, hearing, taste and sight.  She is also gifted with rapid healing and is immune to disease.  As Missy will gradually learn about herself, she will go from being a girl with great skills to a grown woman with truly fantastic powers.

My Review
Ok, so I am going to put this as a young adult or maybe new adult. And it’s also a coming of age story. It’s starts with Missy at soccer camp, and she has this insane urge to leave, go outside in the middle of the night. And then BAM she’s a kitty. A mountain lion to be exact. She also can’t turn back to human, so she goes up into the mountains to learn to be a cat. Well, her whole town and family search for her for years and never give up. She does eventually get to go home and that’s when the fun starts. I liked Missy. She did miss out on her main puberty teenage years so sometimes her reactions are quite funny to me. She’s brave and loyal and quite beautiful and she’s willing to use both her human and her cat instincts for not just herself but to help others. I seriously love that she has helped others. AND then her help winds her up in some trouble. I don’t want to get to involved with that, but it’s now the following of the plot lines to continue the series. But I liked that she found a boyfriend she loves, a best friend that helped her be herself. It was quite a journey. There are several characters that get the spotlight other than Missy and I loved her family as well. Missy makes some friends along the way and she’s also made some special enemies. Those enemies made me almost cry, I mean when they took Missy again, I was losing my mind!!! But no worries, Missy has a way of coming out ok for the most part. She’s quite selfless as well, though a little arrogant at times too.
The writing is well done, though it may take you a bit in the beginning, but I really liked the explanations because they gave us a look into the real Missy. And I liked how things progressed with several little mysteries and fun too. I absolutely cannot wait to read book two, I think it’s going to be even better than the first. 5 BIG KITTY PAWS

Do you recall how your interest in writing originated or did you always just know?
I started writing Missy the Werecat to see if indeed I could actually write; once I started writing her story, ideas kept coming and I kept writing.  The story evolved and after I’d written a hundred thousand words, I knew I had a novel.  I edited the story several times and then sent out a number of query letters to see if any agents were interested.  None were, so I decided to self-publish on Amazon.
I began writing the middle of 2013 and published Dec 6, 2013.  I then published three more books about Missy by Dec 2014.
What inspired you to write your first book and what was it?
I've read LOTS of fantasy books about vampires, witches and werewolves and I really enjoy the genre but it always seems the focus is all about the supernaturals, with their interactions with humans almost nonexistent; humans are merely "prey or food" for vampires or else people to hide from and avoid for werewolves.  Also, the werewolf books are all about the packs and the alphas.

What I wanted to write was a book where: "There is no pack, no pride of other werecats and no alpha".  Missy has enhanced senses, abilities and powers (which increase in later books) but she's interacting with normal humans.  I also liked starting her off completely alone, making her have to cope for two years after suddenly being forced to become a wild predator while retaining her human intellect.  What would living like that do to a person?  Then, when she finally learns to be human again, what would she be like?  Returning to "normal" life yet still having all her enhanced senses and predatory nature?  She retains all the instincts and reactions of a mountain lion but these are now carried over to her human life and must be controlled.  (Hence all the extreme training and exercise she seeks).  I thought trying to write such a fantasy might be fun ... and, it was!  I'm enjoying what I've created and it seems most of my readers seem to "get" what I'm doing and enjoy Missy as well.

Completely unrealistic for a young girl to behave the way she does?  Yep!  Of course!  It's a FANTASY !!!  Is she arrogant?  Well, if you had all those enhanced abilities and powers, which you worked hard to keep hidden ... would YOU be arrogant?  Hard to be humble when you know you can easily overpower everyone around you.  At the same time, I've tried to have Missy be willing to protect her friends and loved ones, stand up to any bully and bravely risk herself in doing so.  Does she make mistakes?  Yes.  Is she perfect?  No.  It's been fun and I do hope readers can continue to enjoy her story.  I've now published Book IV, Missy's Misadventure, and am writing Book V.

Are experiences based on someone you know, or events in your own life?
Not really.

Who do you look up to as a writer?
I enjoy all of the following authors, who write the kinds of stories I enjoy and I read everything they write:  Kelley Armstrong, Jennifer Lynn Barnes, Patricia Briggs, Rachel Caine, Sierra Dean, Jennifer Estep, Diana Gabaldon, Kim Harrison, Faith Hunter, Chloe Neill, Nalini Singh, Carrie Vaughn, Rachel Vincent and Eileen Wilks.
If you had to do it all over again, would you change anything in your book?
Not really.
Is there anything you find particularly challenging in your writing?
My favorite thing about writing is not knowing, when I start writing things, just where the story will end up going.  As I try to work through each situation which my characters find themselves getting into, possible scenarios and dialog will evolve and the result will often go places I’d never dreamed of.  Then, of course, I go back and re-write and edit and re-write some more, but the storyline has emerged and it’s fun to see just what has happened.

Did you learn anything from writing your books and what was it?
I write.  I just write things down and see where those things will take me.  If I’m stuck trying to work out some elaborate plot?  I just write some things for each of my characters and see what they come up with, what direction they will take me.  Often, an exciting plot will emerge or new characters will show up.  So, I don’t just sit there … I write!  I always write the stuff that I want to read about and I don’t worry about my readers.  If I end up liking what I’ve written, chances are that others will like my stuff as well.

Do you have anything specific that you want to say to your readers?
By all means, enjoy my Missy the Werecat series!

P. G. Allison has always loved stories about female characters with special powers (Supergirl, Wonder Woman, Bionic Woman, Batgirl) along with stories about witches and werewolves.  The Missy the Werecat Series has no pack, no pride of other werecats and no alpha; Missy is a girl with fantastic abilities doing great things in today's world, amongst humans.  Future books in this Paranormal, New Adult, Urban Fantasy series are planned where Missy will go on to West Point and eventually serve in the Special Forces. 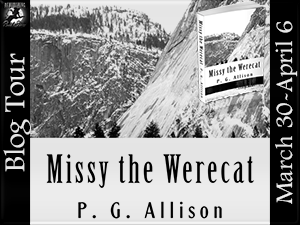