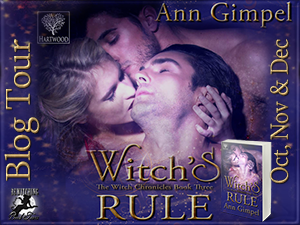 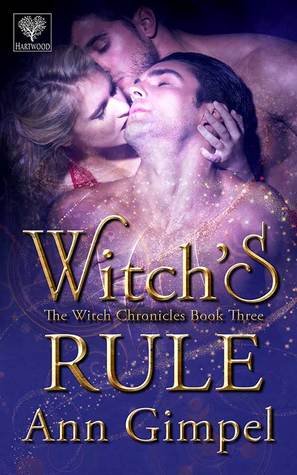 Jenna falls in love with two very different men. Standing on the verge of Earth’s destruction, will she defy convention and follow the song in her heart?

Jenna’s a special witch, sort of, when her magic works, which it often doesn’t. One of three remaining demon-stalkers, she and her sister witches, Roz and Colleen, are Earth’s only hedge against being overrun by Hell’s minions. On the heels of Roz’s and Colleen’s weddings, Jenna is headed for the U.K. when a demon confronts her. Any other witch could teleport out of the plane, but not her. Frustration about her limited power eats at her. It would be pretty pathetic to get killed for lack of skills a teenager could master.

Tristan is a Sidhe warrior, but his primary gift is attunement to others’ emotions. He fell hard for Jenna, but hasn’t had an opportunity to act on their attraction beyond a few kisses because she returned to Alaska, and he’s been in the field fighting demons.

As seer for the Sidhe, Kiernan is haunted by visions, particularly an apocalyptic sending that seems to be coming true. A confirmed bachelor, he doesn’t understand his attraction to Jenna, but it’s so strong he can’t fight it, and after a while, he doesn’t even try, despite recognizing Tristan’s claim to her.

Startling truths surface about Jenna’s magic, and then there’s the problem that she’s falling in love with two very different men. At first she believes she has to pick one of them, but her spirit refuses to walk away from either. It’s impossible to choose between a seer with dreams in his eyes and a beautiful man who intuits her every need. Standing on the verge of Earth’s destruction, will she defy convention and follow the song in her heart?

So this one is the third story in this series and boy is it getting smoking HAWT with all these sexy ladies and gorgeous men. This series is about demon hunting witches, Colleen and Roz, who had the first two books. This one, we finally get to see Jenna get a man... or two ;). With that said, we've been leading up to some crazy things with the demons so far. These ladies are the last of the witches who can get rid of the demons. The rest have been killed off. So, now, with some big baddies trying to take over, we've got to get our game faces on, and Jenna needs to step up. She was always the weak link between the three, or so she thought, until she makes some discoveries about herself, her life, her past, and her magic. WOW, Jenna is my new hero. I have always said Colleen is my favorite of the three, but I loved Roz's story and now I'm a huge fan of Jenna too!! :)

Jenna could never really use her witch magic, but that's because she's not really a witch, or not ONLY a witch, so she is now relearning how to use it right. And boy is she surprised. The other two ladies are freaking a little because they've been mother hens, always over her to cover. I mean, she couldn't even really help herself on an air plane because she didn't know how to use her magic, until she meets a seer, and she's caught between two wonderfully awesome guys. Tristan and Kiernan. They are both good for her for different reasons, so I will let you guys see how she chooses :)

I totally forgot how Ms Ann likes to kill off characters, so be prepared, because I was sad for this one, but no spoilers. And we are seeing into the world of the Irichna Demons, because we get to go there this time. A little road trip it is :) And now we are finally getting along, kinda, with other races, because those damn Sidhe had to be asses forever ago. So with the three witches, we get the Sidhe, the dark Fae, some witches, changelings, and some gods or other higher entities. LOL

There's definitely some romance of course, but there's also Jenna's story of learning herself and relearning her magic. Plus demon fighting. LOL It's a fast read, with a fun plot, and some great action. It would be my opinion that you should read the first two books first. You could read this one by itself, but there's just too much goodness in the first two books LOL This is a great, steamy, paranormal romance series with witches and demons. I really hope this isn't really gunna be the end of this series, because I'd love to see this now... The guys, and their ladies, Alaska, maybe some little mini me's. LOL 5 WITCHY PAWS!!

First off, thank you so much for hosting me. You’ve read a number of my books and keep coming back for more, which is a great compliment.

I become introspective as the year draws to a close, thinking about the year that’s passing and opportunities in the year to come. It’s also a time when I think about special people in my life, family and friends, and fur babies. Yes, especially those fur babies. I also try to figure out what went well last year, and what I need to change.

It’s not a well-kept secret that marketing has always been my least favorite part of the writing life. After railing against the time and effort it takes, I finally decided it was pointless to waste energy complaining about something I can’t change. I’ve begun trying to educate myself about what it takes to find readers who might like my books. Seems like that should be an easy task, yet it isn’t.

There are lots of kinds of books out there, and many different kinds of readers, each with individual needs and tastes. Since it’s impractical (never mind impossible) to create stories that appeal to everyone, the first marketing task is to figure out who’s likely to buy the type of stories I write. Many of the places I advertise have demographic sections. Well, I started studying them, and modifying my ads in response to the information. I also started paying close attention to browsing categories and keywords.

Is it working? It’s too soon to tell, but maybe. Sales have indeed picked up.

My other experiment this last year was dipping my toes into self-publishing. I got my rights back to my first three novels. Taking a good, hard look at them was interesting. The good news is my writing is much stronger than it was four years ago, so this was a great opportunity to do total rewrites, complete with new titles, new covers, and vastly improved stories. What do I mean by that? Well, books one and two are each about ten thousand words lighter. By the time I got around to revisiting book three, it had a better grasp of plot structure and pacing and that one didn’t lose length, but still required quite a bit of rewriting. Anyway, the first of the series just went up for presale.

What do I think of self-publishing? It’s too soon to tell, but I’m sure I’ll have an answer to that one after the end of January or so. How about the rest of you. Do you read self-published books? Do you like them as well as traditionally published ones? Why or why not? I’d love to know.

To answer that one for you, of course I read self published. Those struggling the most without those $ behind a big company doing it for them doesn't mean their books are any less that the others. I happen to have several favorite authors who are self published and I fanatically LOVE them. I stalk them, you could ask them. I wouldn't have loved those books any less if they came from a publisher backing them. :)
About the Author: 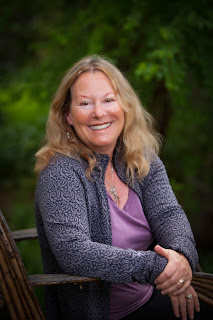 Ann Gimpel is a mountaineer at heart. Recently retired from a long career as a psychologist, she remembers many hours at her desk where her body may have been stuck inside four walls, but her soul was planning yet one more trip to the backcountry. Around the turn of the last century (that would be 2000, not 1900!), she managed to finagle moving to the Eastern Sierra, a mecca for those in love with the mountains. It was during long backcountry treks that Ann’s writing evolved. Unlike some who see the backcountry as an excuse to drag friends and relatives along, Ann prefers solitude. Stories always ran around in her head on those journeys, sometimes as a hedge against abject terror when challenging conditions made her fear for her life, sometimes for company. Eventually, she returned from a trip and sat down at the computer. Three months later, a five hundred page novel emerged. Oh, it wasn’t very good, but it was a beginning. And, she learned a lot between writing that novel and its sequel.

Around that time, a friend of hers suggested she try her hand at short stories. It didn’t take long before that first story found its way into print and they’ve been accepted pretty regularly since then. One of Ann’s passions has always been ecology, so her tales often have a green twist.

In addition to writing, Ann enjoys wilderness photography. She lugs pounds of camera equipment in her backpack to distant locales every year. A standing joke is that over ten percent of her pack weight is camera gear which means someone else has to carry the food! That someone is her husband. They’ve shared a life together for a very long time. Children, grandchildren and three wolf hybrids round out their family.

A big shout out to bewitching book tours who always gives us goodies and Ms Ann for letting me read your wonderful books!! Happy reading and later gators!!