Diabolical Taste is the sequel to The Secret Eater, and is the second in the Kenssie series.

The blurb
Kenssie just wants her fellow demons to respect her. A little hero worship now and then wouldn't go amiss either. But as the lowly thrall of Rak, an embarrassment demon, she'll take whatever crumbs she's offered. When the demon council turns against her master, Rak and Kenssie are forced to relocate to the countryside. It seems Rak has been holding out against his thrall and keeping a secret that will shake her trust in him forever. When someone from Rak's past returns to claim him, Kenssie has to fight for much more than his attention. The lives of innocents and not-so-innocents are on the line. How much of herself is she willing to sacrifice for someone else's happiness?

So this is the sequel to The Secret eater and it's just as good if not better that the first! There is a strange bond between a master demon and his thrall, which is Rak and Kessie. Mostly, I just wanted to tell Kessie that he isn't worth her time. He's more tyrant that anything and she's the one killing herself to make him happy and powerful. And I think this proves that though this is a fantasy story, it's a believable relationship. People always make excuses for the ones they love and let them hurt them because they love them.

Kessie, though she is considered a lower demon has a very powerful gift. She eats secrets. Instead of food to keep us alive, she uses the secrets of others to keep her alive, as well as feed her master. Well, I say he should get off his ass and feed his own damn self LOL. And now, Kessie and Rak are running from the Council after the incident that occurred in the first book. They are struggling, and it's a dark time. And then Kessie discovers Rak's big secret, and a human, and a mess all into one big chaos heap :) I love that she's a demon but she seems so human sometimes. She is such a lovable character. And she wants to do good, like not hurt the people who've already been hurt when she eats their secrets.

There are some old returning characters, and some new introduced characters. And boy are some of them awesome. These characters always seem so well developed and written. And boy does Kessie have some growth in this one. And not just her, but her powers, are growing too. She will make it! And she's funny about it. And the writing is well done. And though I would probably recommend you read book one, if you read this one by itself, I really think you'd be ok. :) 5 DEMON PAWS! I can't wait for more!

Book One: The Secret Eater 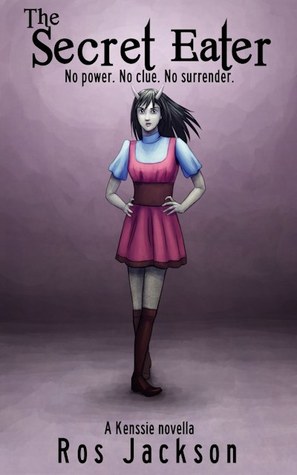 Kenssie is a demon who feeds from secrets. Lately pickings have been slim, and she has grown so weak that her shield of invisibility is slipping. As the servant of a demon who eats embarrassment she already feels like she's the laughing stock of the demonic world. But the scorn of someone who thinks that Hawaiian shirts are the height of cool is the least of her worries. A powerful fear demon is dead set on making her his slave, a position that carries seriously short life expectancy. She has no friends. No powers. No clue. Her only hope of escaping a life of terror lies in stealing a grimoire she's never seen from the clutches of a vindictive group of master demons.

My review is HERE! 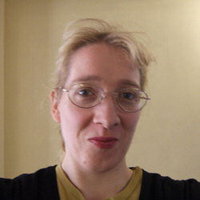 Rock singer, xenobiologist and ninja are just some of the jobs Ros wishes she could put on her CV. She has been a book blogger for over a decade, and has done a wide range of different jobs whilst dreaming of the written word. She lives in Lincolnshire under the iron rule of a grumpy black cat.